"TRU Group has the full comprehensive capability to produce battery grade lithium chemicals from brine or minerals! We ONLY participate in lithium projects TRU Group assesses as totally legitimate and that have reasonable prospects"

With over 150 person-years years of lithium experience, TRU Group has been undertaking lithium investigations for more than twenty-five years as well as a number of due diligence assignments on junior lithium mining companies in particular. You as a lithium investor are NOT adequately protected against incompetence, dishonesty and scams! In the last five years alone there has been over forty new public or private brine-based and mineral-based lithium companies looking for investment. (TRU Group in 2021 is following over 150 brine projects in the "Lithium Triangle" and has used a unique evaluation criteria to evaluate and rank them). During this period a large number of listed lithium companies obtained hundreds of millions of dollars from unsuspecting investors only to disintegrate or at minimum leave the lithium space. Yet to TRU Group knowledge no-one (management, directors, consultants, promoter, investment banks, stock brokers, etc) has been held accountable.** The investor "hustling" by some of these actors is far from over: The old-timers including a few top-ranked juniors have been joined by a new wave of start-ups emerging today banking on the recharged lithium hype 2017-2020 spurred by the Tesla factor - some of these new lithium juniors are shockingly managed by the same people responsible for previously under-performing entities! These irresponsible actors are spoiling it for the good guys with credible projects! Here is a checklist of items to consider and watch out for in making a lithium investment since they are quite prevalent - 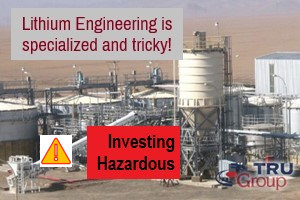 High Country News, USA: August 14, 2017: On the lithium claims in the Paradox Basin . . "it was the result of one small but consequential error"- Hunting for lithium near Moab, Utah - PDF download

The New York Times, USA: March 14, 2010: "There are a lot of people throwing money into this, and a lot of people are going to lose their money." The Lithium Chase - PDF download

Mining Markets Magazine, Canada: March 2010: ". . there is a huge amount of misinformation about this. As an investor, you have to be extremely careful." Lithium A Moody Market Darling - PDF download

Business News America, Chile: January 22, 2010: "Investors need to be careful because most don't realize they are putting in money now that they likely will never see again" Interview - PDF download

** In 2014 - Just where has American Lithium Minerals Inc AMLM:OTC US gone? The lithium junior company in Nevada only in and for America. And those associated with it: high profile directors, top management, lithium consultants, lithium stock promoters, lithium investment brokers and banks? Japan Oil, Gas and Metals National Corporation (JOGMEC) alone invested invested $4 million! Thousands of Americans, others and even "sophisticated" corporate entities also invested heavily in this junior.
*** 2014 - "Byron Capital Markets Ltd. has ceased operations, effective immediately" byroncapitalmarkets.com. Probably the most high profile battery materials lithium (rare earths and graphite) investment advisors. What of all the the lithium investors? (Ouch!).
**** In 2014 Canada Lithium Quebec fully commissioned Lithium Carbonate Plant (with spodumene mineral processing) start-up, near Val d’Or, PQ Canada bankrupt: never operated - mothballed through 2020 (IRR reported by consultants 37%!)
In 2012 Jiangsu China lithium carbonate plant (Australian spodumene feed from Mt Cattlin and Greenbushes), starts but underperformed (including an explosion with two dead), not profitable and sold to Tianqi Lithium for US$170 million in 2013.
****** Bottom line = from world's lowest cost producer SQM website September 2016 "confirmed reserves of the salar that belong to SQM, will last at least for 30 more years"